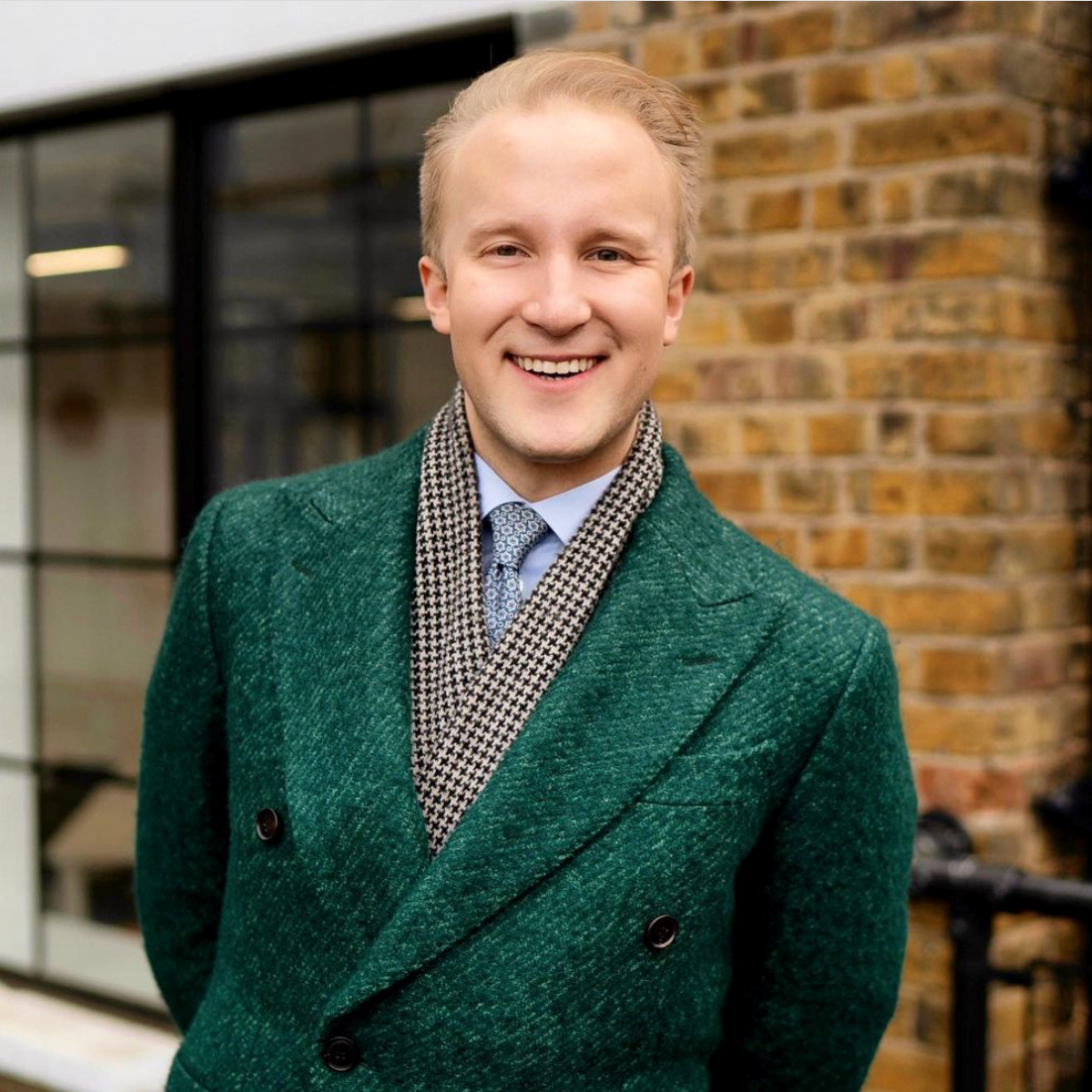 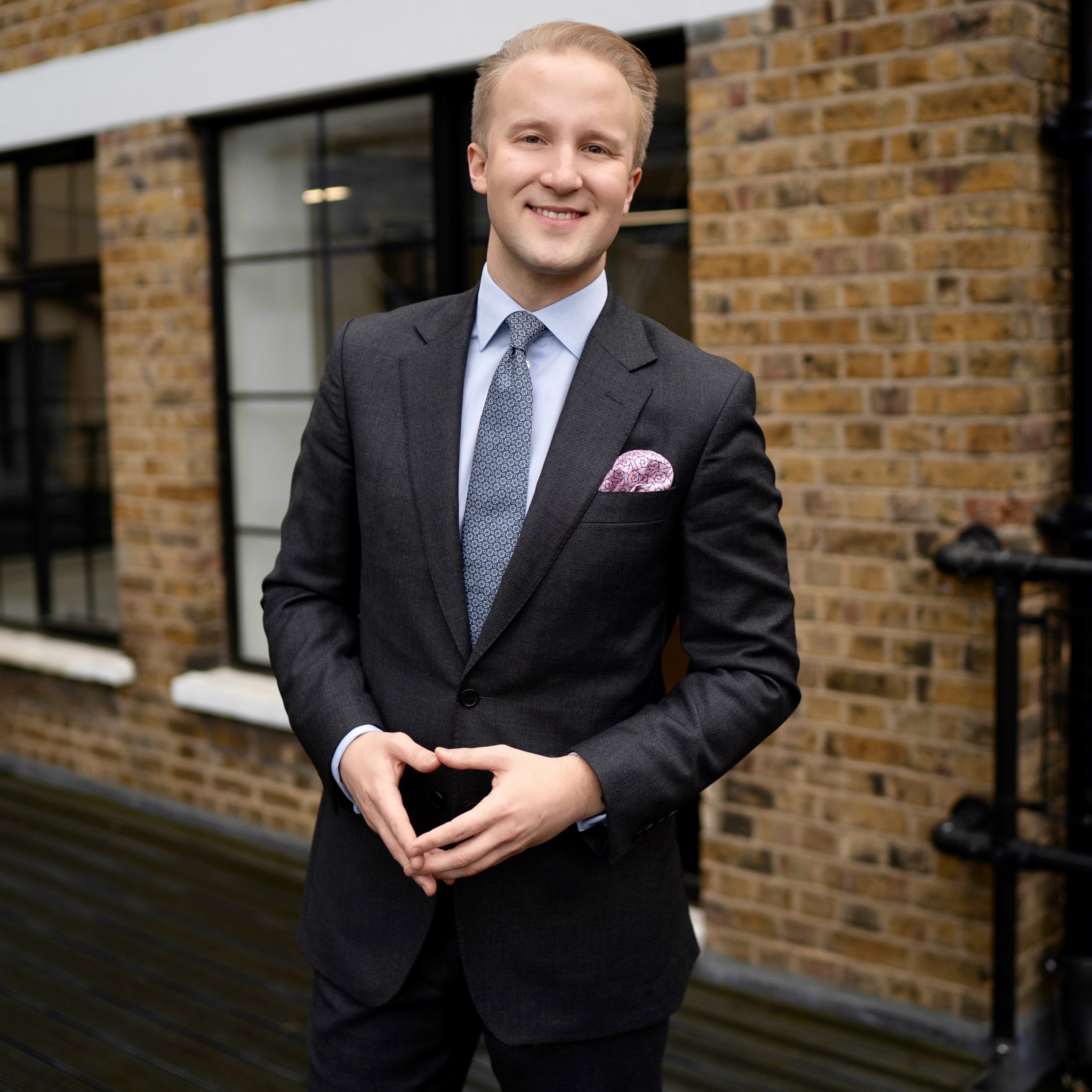 William Hanson is a trusted authority on matters of etiquette, manners and good taste.

Since achieving the title of ‘Britain’s Youngest Etiquette Expert,’ he has gone on to work within Royal and VIP households, coach diplomats, businessmen, schools and colleges and advise several multi-national brands such as Bentley, Champagne Bollinger, The Ritz, London and WeWork.

Since 2018 he has co-hosted the chart-topping podcast Help I Sexted My Boss. Together with accomplice and friend Jordan North, the pair answer listeners’ intriguing and unusual dilemmas about everyday life. In the Autumn of 2021 Sexted went on tour across 11 UK cities. Since 2021 William has also co-hosted Keeping Up Appearances: The Luxury Podcast, a hilarious guide to the hit BBC sitcom.

William is an engaging speaker, delivering humorous and informative talks to national and international audiences, having taken his expertise around the world to teach etiquette in countries such as China, India, Monaco and Russia.

William is a columnist for MailOnline where he employs his candour and wit to write on the etiquette of modern society, from how to correctly write your emails to avoiding disastrous dinner dates. He is also frequently quoted in such publications as The Times, the Sun and the Telegraph. His first book is the best-selling The Bluffer’s Guide to Etiquette which explores etiquette and decorum at all stages of our lives.

He is a popular guest on various radio and television programmes including BBC Radio 2’s Steve Wright in the Afternoon, BBC Breakfast, CNN, Sky News and ITV’s This Morning. William was also the resident expert on the hit ITV daytime show Let’s Do Lunch with Gino & Mel.

William is able to give an informed and witty twist on brand campaigns and has had the pleasure of partnering with household brands such as the National Lottery, Amazon Prime Video, Three Mobile, Moonpig, KIA Motors and more.

William sees that good manners are not just part of a bygone age but are in fact timeless and he strives to make them accessible and comprehensive to everyone. 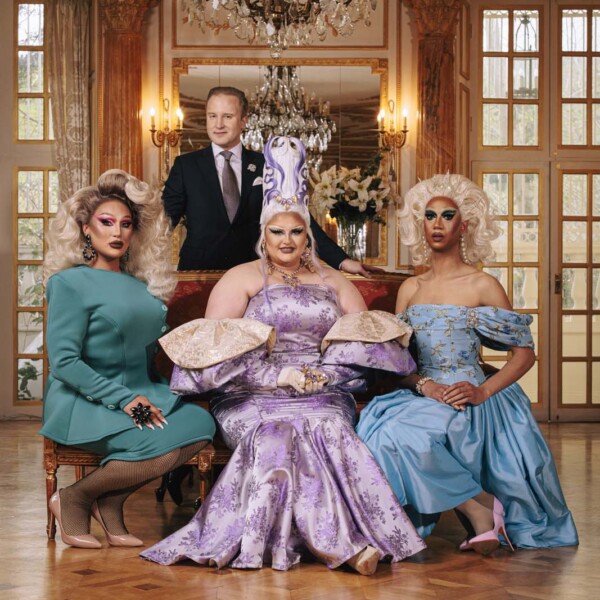 Chart-topping 'Help I Sexted My Boss' 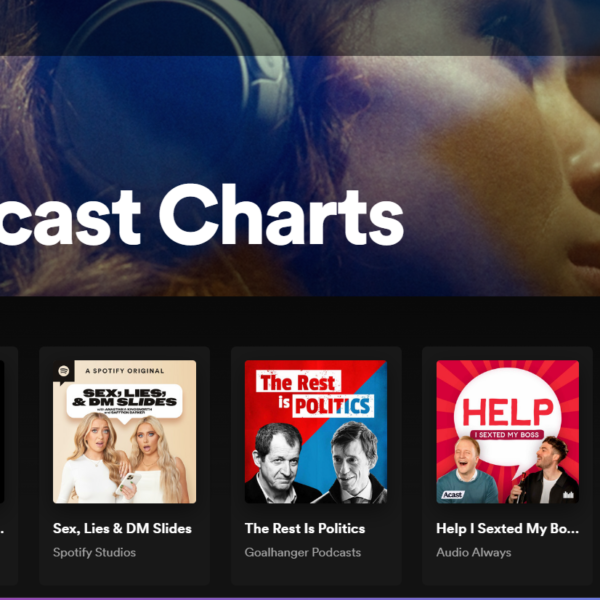 William teamed up with wellness app, Yours, and recorded a calming sleep story. 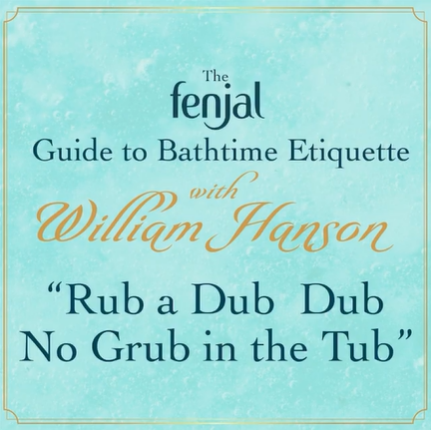 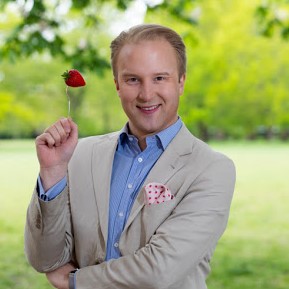 William educates on the etiquette around strawberries for AVA Berries. 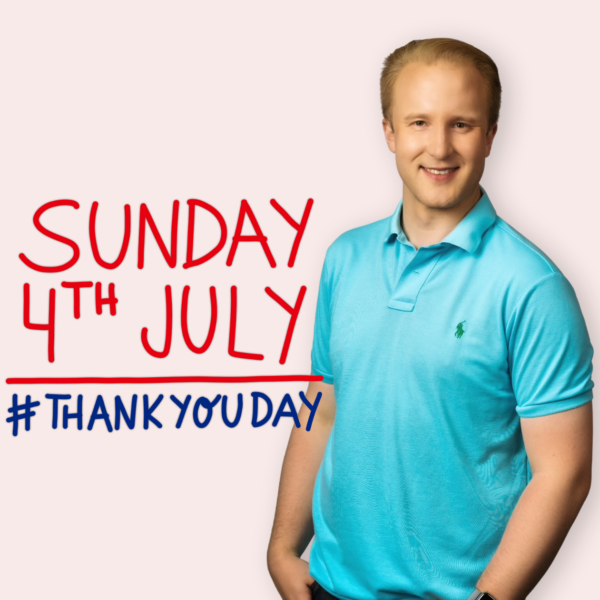 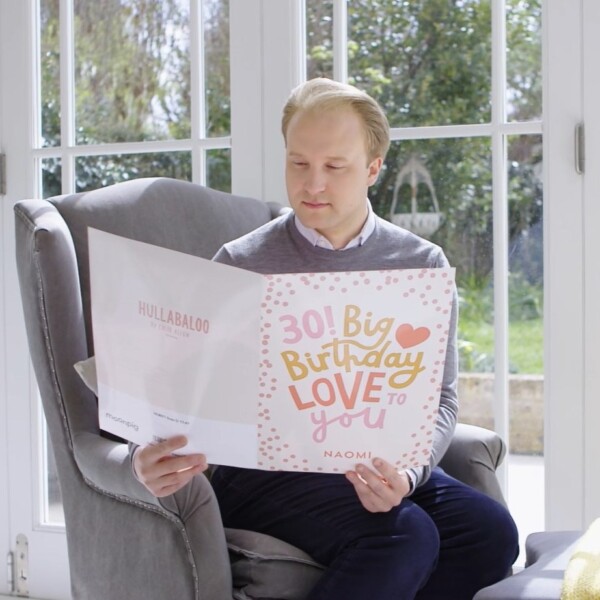 Moonpig’s first ever group card is explored by William. 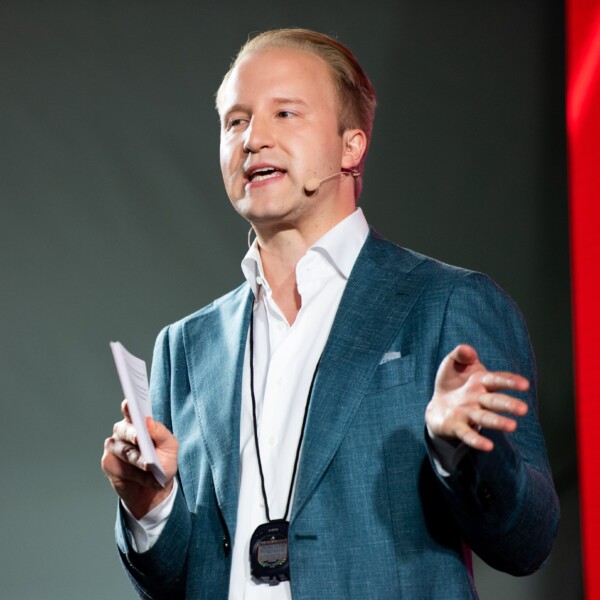 Help I Sexted My Boss 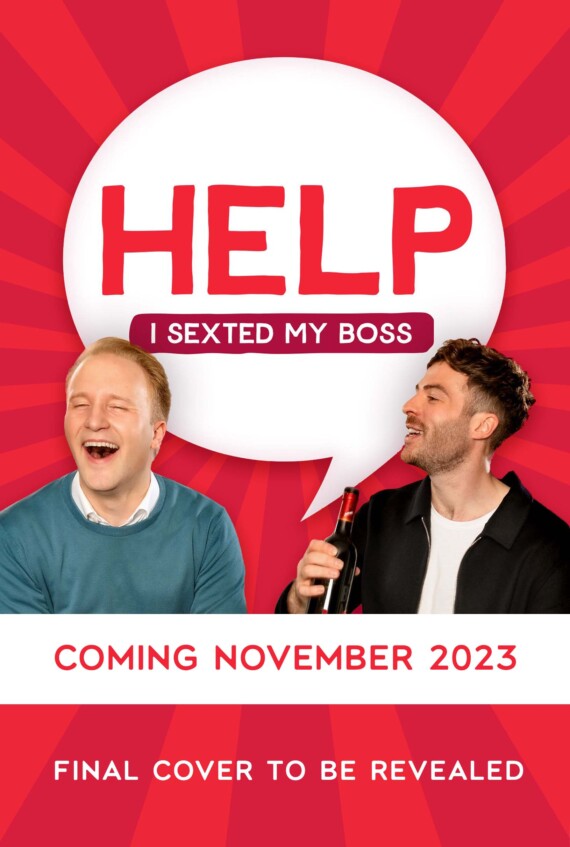 Should you tell your mum if you stumble across your dad on Grindr?
How do you ask your mate for that £50 back?
And what should you do if you’ve accidentally sexted your boss?

Navigating the challenges of modern life can be tough!

Now, thanks to the hit comedy podcast Help I Sexted My Boss, your 21st century dilemmas are solved. In this hilarious and essential handbook, William Hanson and Jordan North are on hand to help you find solutions to all of your awkward problems.

William and Jordan are from very different worlds. William’s a Southern etiquette consultant and expert in all things proper. Jordan’s a Northern radio presenter and expert in all things common. Together they’ve entertained millions of podcast listeners across the world. From dinner parties to picky teas, first dates to flatmate dramas, now you can read brand new useful and useless advice from these unlikely best friends.

Rooted in William’s encyclopedic knowledge of manners and with lashings of down to earth honesty from Jordan, Help I Sexted My Boss is the book that helps you navigate the challenges of modern life. 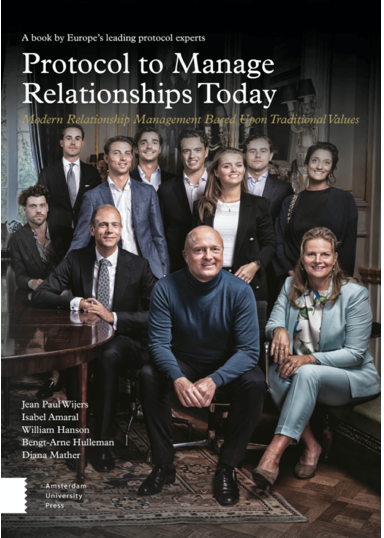 Co-authored with some colleagues in the world of etiquette coaching, Protocol to Manage Relationships Today explains the contemporary value of protocol, not only for monarchies or diplomatic institutes, but for any organisation. It describes how the new generation of British royalty and people like The King of The Netherlands and President of Portugal use protocol to build strong relationships, as well how protocol is used for fashion shows and organisations like World Press Photo and the Berlin techno-club Berghain.

The Bluffer’s Guide to Etiquette 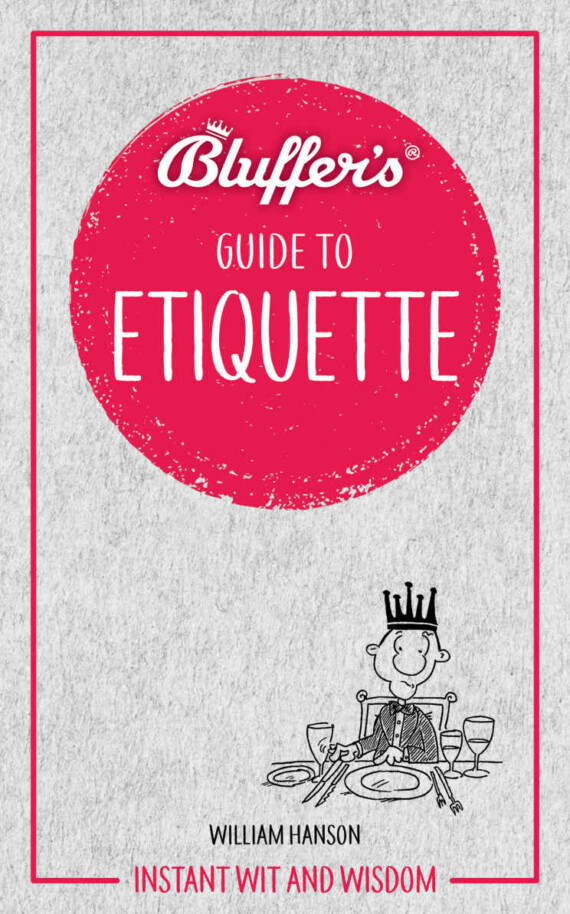 Instantly acquire all the knowledge you need to pass as an expert in the world of etiquette and high society. Know what to say, what not to say, where to be seen, and what and what not to wear. Never again be found wanting when asked if someone is a PLU or a NQOCD, why port should be passed to the left, or how many air kisses you should aim at the proffered cheek of someone you barely know. Arm yourself with the essential words or phrases which have entered the etiquette lexicon from pre-revolutionary France, and know not to mix up your droit du seigneur with your noblesse oblige. Bask in the admiration of your aristocratic hosts as you enquire politely about the place a table, pronounce confidently on whether the going is heavy or soft, and hold your own against the most sneering of posturing parvenus. 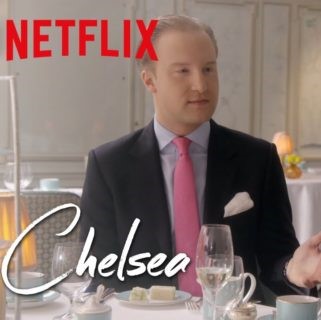 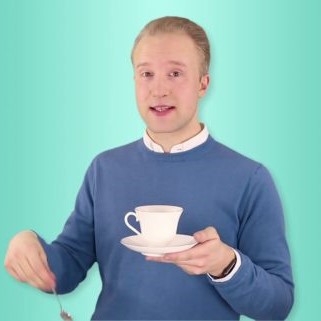 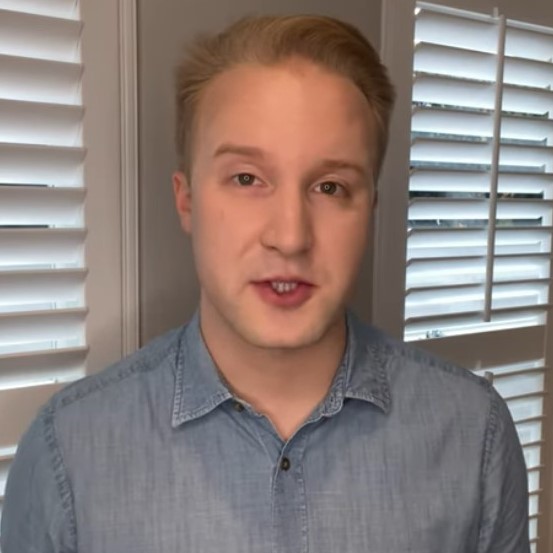 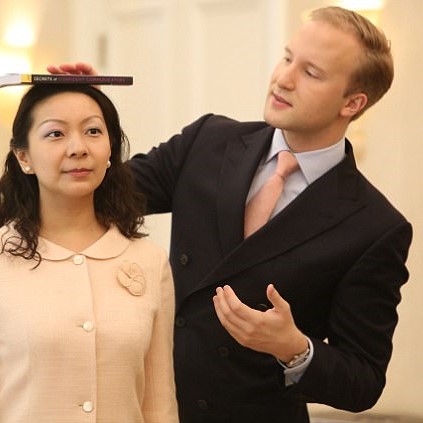